Please Select a Section to Skip to 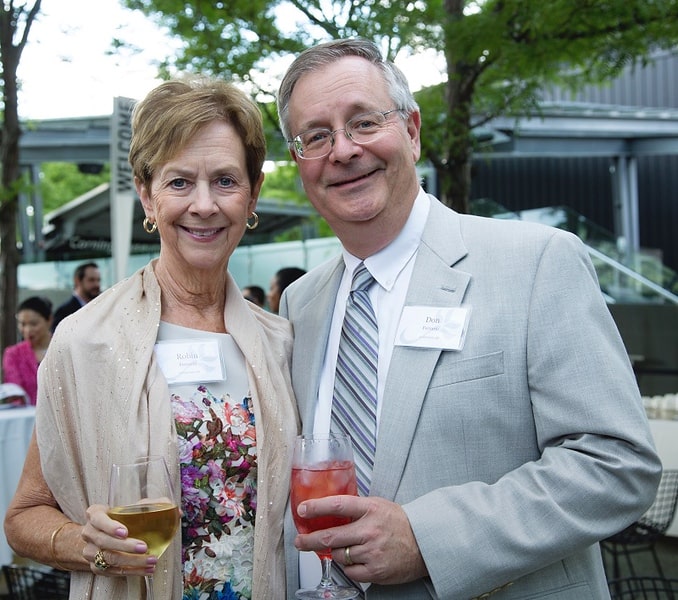 Don and Robin Ferrario acquired the Robertshaw home in 2017 as part of a commercial site development for an Auto Dealership.  Dan Robertshaw and his family were living in the house at the time.  The purchase contract allowed that the family could take any art from the property prior to the real estate closing, noting that the art was part of the house itself.  The Robertshaw family ultimately did not pursue removal of the paintings, finding no practical way to remove them.  The house would be demolished along with the paintings.

We were completely unaware of the Martha Robertshaw story or the paintings.  We did not see the inside of the house until after the real estate closing.  The paintings were done in the 1940s and 1950s.  The scenes on the shower walls are in amazing condition, considering that the family continued to use that shower until 2017.  An ordinary plastic shower curtain is the only thing that protected the paintings.

After visiting the house we fell in love with the paintings  The first step in preservation was the photography you see here on this web site.  The second step was more difficult….

Removal from the house

The drywall in the house dates back to the 1920s.   Everyone said it would be impossible to remove drywall that had been in place for almost 100  years.  Many of the paintings were on both sides of the stud walls.  The original plan was to remove entire stud wall sections as complete assemblies by cutting the studs top and bottom.  We hired two very creative carpenters, Travis Nocci and Dennis Munn.

There were two problems with removing entire wall sections.  The first was the structure of the house.  The stud walls supported the second floor and roof of the house.  Some of the paintings were on the inside of exterior walls which could not be removed without collapsing the house.

The second obstacle was transportation and storage.  The removed sections would be quite heavy and large.  You would need a crane to move them.  Where would they go?  That plan was impractical.

Travis and Dennis devised their own system for removal.  They would open the end of a wall and split each stud vertically.  That would allow enough of a gap to get their hands through to the next stud, and then the next stud,…  without breaking the drwyall.  The drywall could break or crumble at any time so it was a risky plan.  We had nothing to lose by trying because the house would soon be demolished.  Some would probably crumble but we’d be happy if at least some pieces were intact.

With each painting on the floor, they next removed the remaining portion of the nails and studs still attached.  Great care was required in order to not further damage the paintings.  The removed drywall paintings were then glued to plywood to prevent further crumbling.

We were able to save all the paintings.  Nothing was lost!  The collection is now safely in storage at Ferrario Auto Team in Elmira, NY.  When the new Dealership is built on the site of the former Robertshaw home, the paintings will be displayed to the public.

Don and Robin are now the caretakers of this marvelous collection.  We will make the paintings available for short term exhibition with organizations who are able to protect them.  Contact Don Ferrario at 607-734-1681.

While great effort is made to ensure the accuracy of the information on this site, errors can occur.
Please verify all pricing information with a customer service representative.
This is easily done by calling us or visiting us at the dealership.

Listed below are your saved and recently viewed vehicles

You can also view your saved vehicles on other devices. Sign up

Have your vehicles with you

Save your favorite vehicles for later viewing on your desktop or mobile devices.

Keep track of all the vehicles you've viewed for a better car shopping experience.

Narrow your search by comparing your favorite vehicles.

Get a Quick Quote